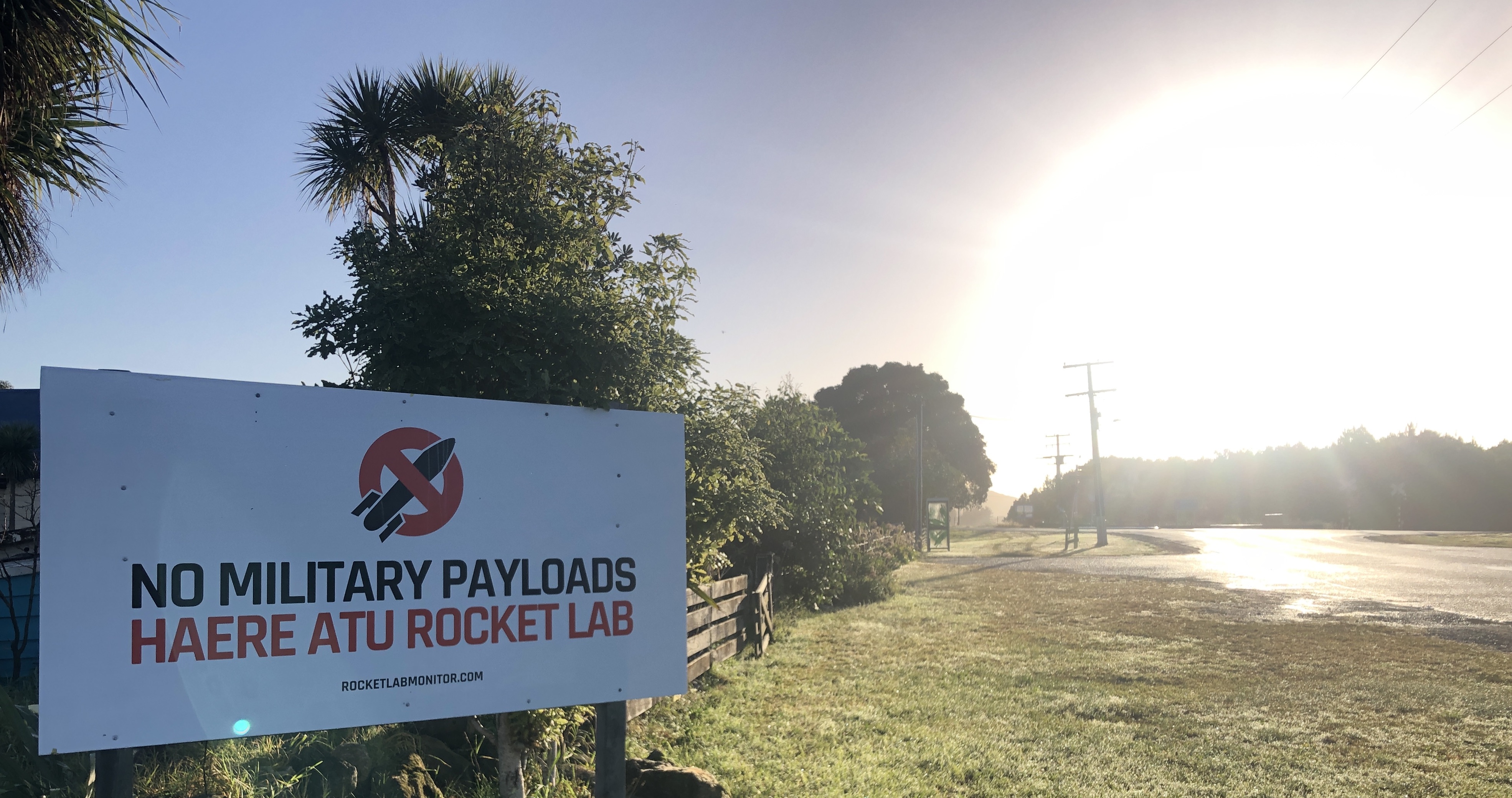 Last week DSC Researcher Marcus Coll travelled to Te Ika a Maui (North Island) and spent four days in Māhia Peninsula which houses the launch site for Rocket Lab. As part of his PhD fieldwork, he interviewed longstanding kuia of the DSC whaea Pauline Tangiora and also spoke to some of the locals about their feelings on Rocket Lab. This is an account of his time there and some background to the story of Rocket Lab.

It was dark by the time my brother and I finally arrived at the entrance to Māhia township, greeted by a large white billboard reading “NO MILITARY PAYLOADS, HAERE ATU ROCKET LAB”. These billboards are created by local group RocketLabMonitor who keep a close eye on Rocket Lab’s activities and purposes. Māhia has an obvious undercurrent of discontent at the existence and purpose of this Kiwi start-up which has made the town famous. ‘Space fever’ was evident even in our campsite toilets (of all places!) with a sign reading “Māhia - New Zealand’s Space Coast” next to an obligatory alien cartoon - exciting one’s astronomical passions right in the heart of the ablution block…

As one of only 11 nations globally with a space programme, our small country again “punches above its weight”, with Rocket Lab often lauded as a New Zealand success story. Brainchild of Southlander Peter Beck, the company has grown exponentially since its inception in 2006. Its internet handle rocketlabusa.com alone, however, suggests that this once Kiwi enterprise is now very much an American entity. It is currently listed on the Nasdaq to the value of US$6.6billion and the company’s headquarters is located in Long Beach, California. Rocket Lab has brought some jobs and tourism to Māhia for which the locals benefit, but according to one, “Our rent has gone up so much since they came here. We’re now price matching to these Rocket Lab guys.”, suggesting local benefits are afforded to some but not all.

Whaea Pauline Tangiora has been a kuia of the DSC whānau for many years and lives up on a hill overlooking the fields of Te Māhia, her ancestral homeland. Te Māhia Peninsula is described as the fish hook of Maui. At the end of it sits Rocket Lab’s Launch Complex 1, built on wahi tapu (sacred land). For Whaea Pauline, Rocket Lab was concerning in the beginning, but her fears were allayed when she was told it was only there for peaceful purposes.

"They went to the trustees who were just ordinary people, and our older people who didn’t really understand what the whole system of Rocketlab was about. And they, like me, thought it was for the benefit of the environment."

She is now disillusioned. As a kuia who has been a stalwart indigenous representation in the peace movement within Aotearoa and globally, Whaea Pauline feels betrayed by Rocket Lab for their involvement with military clients based in a foreign land.

Many other locals also feel betrayed by Rocket Lab and what it has brought to the area. Promises were made that the payloads being launched would only serve to document weather and sea level rise for the benefit of climate change mapping. While this has comprised the majority of Rocket Lab’s activities, to date a third of all payloads have been contracts with the US military or affiliated agencies suggesting more strategic purposes are being sought. This, by definition, means that the US nuclear apparatus also has the potential to benefit. Despite reassurances from the New Zealand government and Rocket Lab, activities which benefit a foreign military are not what many in Māhia or the iwi feel they originally signed up to. The Prime Minister has been alerted of these concerns by the Public Advisory Committee on Disarmament and Arms Control (PACDAC), which was set up as part of the New Zealand’s Nuclear Free Act in 1987. PACDAC chair Wayne Mapp (a former Minister of Defence) stated,

‍"It can't be ruled out. You've got three or four different branches of the US Military. We're not slamming the US Military, it's just New Zealand has a different national security and arms control policy".

These concerns are shared by many in the peace and disarmament movement across the motu, and the people of Māhia.

Driving up and down the undulating hills, with the Pacific on one side and Hawke’s Bay on the other, I couldn’t help but think that Māhia feels a world away from the US military-industrial complex. Yet, for this very reason, it seems an ideal place for prying eyes to be kept at bay. Driving to the end of this peninsula is no longer possible, and warning signs state that any trespasses will be prosecuted.

From the closest vantage point to the launch site you can see Waikawa (Portland) Island just across the water. This is sacred land for the Rongomaiwāhine iwi on which many of their ancestors once lived. Today, it stands as a silent witness to activities which locals, and New Zealanders at large, would not be proud to be a part of.

Aotearoa is now becoming somewhat of a haven for private space enterprises with proposals having been put forward by another kiwi entity, Dawn Aerospace, to open a launch site on Canterbury’s Kāitorete Spit, just south of Christchurch City. This is a little too close for comfort for many of the DSC whānau based in Ōtautahi, so no doubt we will be keeping our eyes and ears open with this new prospect. Whether the same clients will come knocking on their door remains to be seen, but looking at the discontent and disappointment of those around Māhia, it doesn’t take much to imagine where we could end up. New Zealand’s nuclear free identity was forged by taking a stand against much bigger fish, and it’s up to us to protect that legacy for the future, so we’ll be watching this space! (pun intended).

This was made possible through a research grant from the Asia New Zealand Foundation.

For more Rocket Lab news, check out the links below:

Mahia, We Have A Problem

'I feel betrayed' - Some Māhia locals unhappy with Rocket Lab

Business commentator poses the question, does Rocket Lab have a toxic culture?