The Need for Nuclear Disarmament 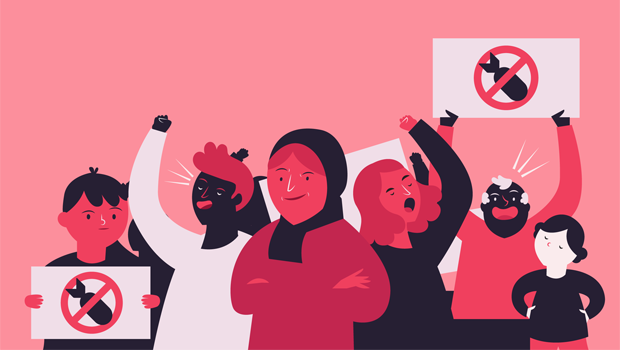 It has been two months since Russia’s invasion of Ukraine began. This invasion has raised serious concerns about nuclear attack, use of illegal weapons and potential war crimes. The international community is clear: this invasion is a violation of international law and Russia’s arguments to justify its invasion under international law do not stack up. Scenes of the horrors of war have been broadcast in real-time. Aid has been mobilised for the humanitarian crisis in Europe like never before. The impact of this war on global and regional peace and security will be felt long after its end.

President Putin’s early threat of the possible use of nuclear weapons has brought back active discussion of the possibility of nuclear war into mainstream channels. Ukraine itself had a large nuclear arsenal until 1994 when it signed the Budapest Memorandum and handed over 1,600 nuclear warheads to Russia that were left over from the former Soviet Union in exchange for a peace treaty and a guarantee never to be invaded or threatened. Investigation of this invasion by the International Criminal Court has started, though it will take time to progress. In the meantime, the international community must continue to support and bolster the diplomatic and multilateral structures that are in place to maintain international peace and security. One that is particularly pertinent is the framework for nuclear disarmament in the Treaty for the Prohibition of Nuclear Weapons (TPNW) which has its first Meeting of States Parties (MSP) this June in Vienna.

Focusing on how to prepare for nuclear war, on creating ‘smarter’ nuclear weapons is an angle that normalises the existence of nuclear weapons. It ignores the fact that any use of nuclear weapons would kill hundreds of thousands, if not millions of people; would render healthcare systems ineffective; would devastate the environment and lead to long-lasting famine. The evidence is clear: nuclear war cannot be prepared for; the impacts would be catastrophic for humanity and the planet. The argument should not be what type of nuclear weapons we deploy, but that their existence is an affront to human life and is now illegal under international law.

A single nuclear warhead is a weapon of mass destruction. We must never forget the legacies of the two nuclear weapons that bombed Japan (one in Hiroshima and one in Nagasaki) and the destruction, suffering and irreparable damage they caused. We cannot normalise the existence of nuclear weapons. They are incompatible with respect for human rights and life on our shared planet. The only way out of the threat of nuclear war is through nuclear disarmament.

Russia is not the only possessor of nuclear warheads and with eight other states possessing nuclear weapons (the United States, China, France, India, Pakistan, Israel, Democratic People’s Republic of Korea, and the United Kingdom) and five NATO-members also storing US nuclear weapons on their territories (Belgium, Germany, Turkey, Italy, and the Netherlands) the problem is greater than one country alone. In the wake of Russia’s invasion and increased nuclear militarisation globally, it is more important than ever that the widest range of stakeholders come to the table to advance nuclear disarmament.

Discussion that normalises the existence of nuclear weapons can lead people to believe that there is no possibility other than their continued existence and that the way out of the nuclear threat is to ‘improve’ or modify nuclear weapons. There is an alternative, however, and that is nuclear disarmament. Nuclear disarmament views nuclear weapons as unacceptable and their use unthinkable. We have an international framework for enacting nuclear disarmament now, in the Treaty of the Prohibition of Nuclear Weapons. TPNW provides a clear way out of our nuclear emergency. The war in Ukraine has only underscored the moral and legal imperative to eliminate the threat of nuclear attack by eliminating the weapons themselves.