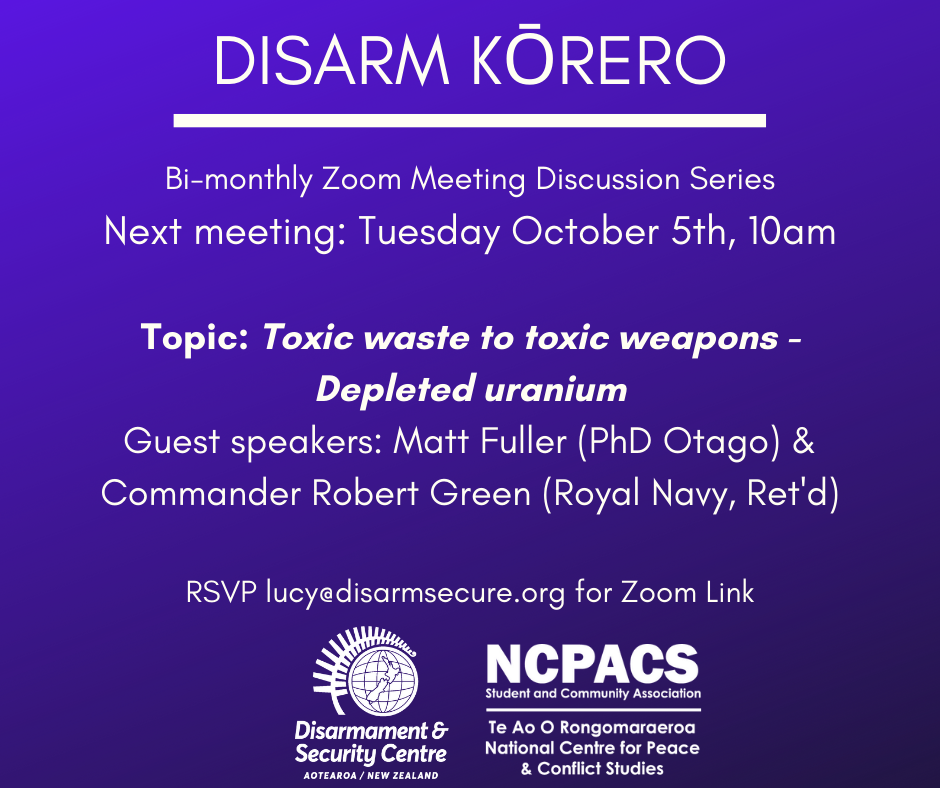 This upcoming Disarm Kōrero session is co-hosted by the Disarmament and Security Centre and the National Centre for Peace and Conflict Studies Students' Association (University of Otago) and we'll be delving into the issues surrounding depleted uranium.

Come join us for an insightful, interesting (and hopefully inspiring!) session discussing a very important disarmament issue. All welcome.

Please register through Event Brite to receive the Zoom Link.

Bios:
Matt Fuller - PhD student in peace and conflict resolution at the University of Otago in Dunedin. He focuses on Ethics and Weapons. Before that he was an Instructor of Philosophy at St. Philip's College in San Antonio, Texas. He has also worked for various NGOs and Research groups in Washington DC, Northern Ireland, and South Africa. He is also a published author, a Black Belt in Taekwondo, and a NISOD Teaching Excellence Award Winner.

Robert Green - Commander Robert Green served for twenty years in the British Royal Navy. As a bombardier-navigator, he flew in Buccaneer nuclear strike aircraft and anti-submarine helicopters equipped with nuclear depth-bombs. His final appointment was as Staff Officer (Intelligence) to the Commander-in-Chief Fleet during the 1982 Falklands War.

He chaired the UK affiliate of the World Court Project, which led to the International Court of Justice judgment in 1996 that the threat or use of nuclear weapons would generally be illegal. Former Co-Director of the Disarmament & Security Centre in Christchurch since 1998, he is the author of Security Without Nuclear Deterrence. Robert also chaired the NZ branch of the DU campaign.